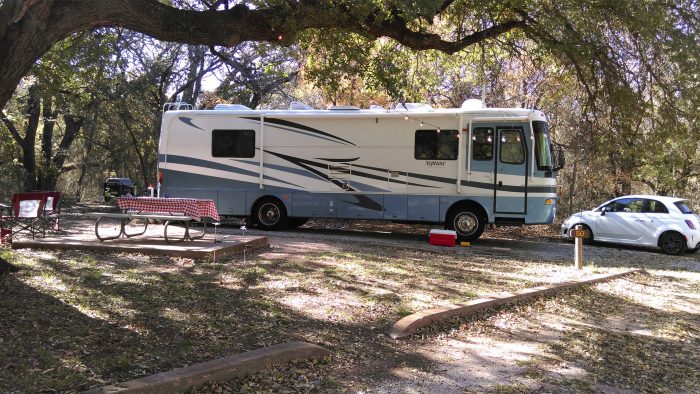 We always host the Thanksgiving feast for the family and often for others who would otherwise be eating alone. It is part of our tradition. Pat and I purchase and cook the meal, clean up the aftermath, and distribute leftovers in provided containers. Like the square root of 2, Thanksgiving at our house is a constant.

This year, we threw constants to the wind, left the grid in Big Blue, and had Thanksgiving in the woods of a state park. But did we completely throw out tradition?

The 2016 Thanksgiving would be the first year that Sean could not come home for the holiday. He is 19 and a working man now, going to school and supporting himself. With Sarah and Dwan now in Oregon for grad school, this Thanksgiving would already be a few steps away from the norm. We decided to step even further away, visit Sean by way of a couple of State Parks, and leave the cooking, cleaning, and leftover distribution behind.

Pat and I sort of took two weeks off for this trip: relaxing in Big Blue but also working part of the time. Having a hotspot and unlimited data has it advantages. We didn’t want to burden Sean with our presence for the entire two weeks, so we started out at McKinney Falls State Park in Austin.

The weather couldn’t have been more perfect. Pat, Red, and I enjoyed walking the trails and seeing the waterfalls. Our campsite was blessed with hundreds of moths, flying around like extras in a fairy tale movie.

Red got to go out to a city park and a dog-friendly restaurant, and Pat and I got to go to Sixth Street to watch the Coogs maul #3 Louisville, to play some foosball, and to dance some West Coast Swing into the wee hours.

From McKinney Falls, we headed northwest to Sean and nine days at Abilene State Park.

Every week or so before our visit, I would remind Sean that he needed to make plans for Thanksgiving dinner. He wanted to cook it in his apartment. I sent him a few family recipes and told him what every Thanksgiving cook needs to know: it takes several days to thaw a turkey in the refrigerator.

After a few weeks of reminders, I sensed that Sean was losing his enthusiasm for cooking, and I suggested that he find a restaurant that was open on Thanksgiving—no one would have to cook or clean. When that suggestion didn’t take flight, I mentioned that many grocery stores sell the full meal, already cooked; he only needed to order ahead of time. Tired of my repeated reminders, Sean assured me that he would take care of Thanksgiving dinner.

Pat and I—and Doggy Dog—had a blast at Abilene State Park. The Civilian Conservation Corps (CCC) built the park from 1933 through 1935.

The 12-foot-deep swimming pool and associated concession building and observation platform are still in use. Miles of easy-to-navigate, wooded trails wind through the park, and Red collected plenty of new smells in our daily walks.

Sean worked almost every day leading up to Thanksgiving. It quickly became apparent that cooking the meal was not in his future—at least not this year. To his credit, he offered to heat up some frozen taquitos, but Pat and I decided we’d cook just a little bit for the three of us. We cook at least twice a day when we travel in Big Blue anyway, so it was no big deal.

With an RV fridge, a three-burner stove, and a combo microwave-convection oven at our disposal, we decided to keep it simple. We got a freezer-to-oven turkey breast, a big can of seasoned green beans, and a can of sweet potatoes.

I already had all the ingredients for chili and jalapeno-cheese cornbread. Since Sean doesn’t like turkey and we needed to cook it anyway, I made chili and cornbread Wednesday night. Hmmm… Cooking the Wednesday before Thanksgiving: not exactly nontraditional.

On Thanksgiving, I started cooking and planning for everything to be ready at the same time. Then I realized my dilemma: the chili and cornbread were cold, and my oven was also my microwave and was currently occupied with a turkey breast.

I had just the right number of burners on my propane stove for the green beans and sweet potatoes and to make the gravy—so I had that going for me. Wait, what? I was making gravy? Heck, I was cooking an almost-full Thanksgiving meal in a half-kitchen with two feet of counter space.

Tradition Thanksgiving after all

Sean invited his friend Josh, who would have otherwise been eating alone, and somehow, Pat and I managed to have everything ready and warm at the same time.

We were able to get the football game by using my hotspot to stream the station through my computer to the big TV. With the food ready and the game on, the four of us wiggled into the small booth dinette with our turkey and chili and watched football in the woods. And a new Thanksgiving tradition was born.

Oh yes, we sent Sean home with the leftover chili in one of our containers.